Twitter Inc. TWTR -0.53%said its user growth slowed in its first quarter as a public company, sending its shares plunging in after-hours trading.

Adding to the concern, Twitter’s own advertising metric for gauging usage, “timeline views,” slid for the first time sequentially. The company measures a timeline view every time a user refreshes a page on desktop or mobile device, what Twitter Chief Executive Dick Costolo on Wednesday called a “proxy for the amount of content our users consume.”

Taken together, the numbers suggest Twitter’s growth engine is losing steam and its existing users are becoming less interested. That could weaken its pitch to advertisers, who want to ensure their brands are reaching a wide audience of users who are active participants and not sideline observers. According to WSJ

“Twitter finished a great year with our strongest financial quarter to date,” said Dick Costolo, Twitter’s CEO. “We are the only platform that is public, real-time, conversational and widely distributed, and I’m excited by the number of initiatives we have underway to further build upon the Twitter experience.”

In a conference call with analysts Costolo was quizzed about its slowing user numbers. He said the company was “doubling down on accelerating growth in our core user base” in 2014. Twitter has “massive global awareness” he said but needed to make it easier for new people to “get it”. Reports the Guardian

Analysts are concerned that Twitter’s growth is slowing and that while Twitter’s revenue is more than doubling each quarter, it has yet to make a profit. Shyam Patil, analyst at Wedbush Securities, said for many analysts the company’s share price had risen “too far too fast”.

Patil, who has a neutral rating on the company, said no new information had come out on the company before the quarterly results, and the share price had been driven up by expectations rather than facts. “I think it’s a good business. It is clearly differentiated from the competition,” he said. He said Twitter had yet to figure out how it was going to make money, and that at the moment the sky-high valuation was based on bets that it would hit on a lucrative plan.

“You could see an incredible house and think it’s worth half a million only to find out it’s being sold for $2m. It’s still a great house,” he said.

In recent months, Twitter has made a number or major changes, redesigning its mobile apps and websites and adding image and video previews to tweets. The moves are designed to improve “engagement” – a key measure for advertisers who want to see their content favourited, retweeted and commented upon. 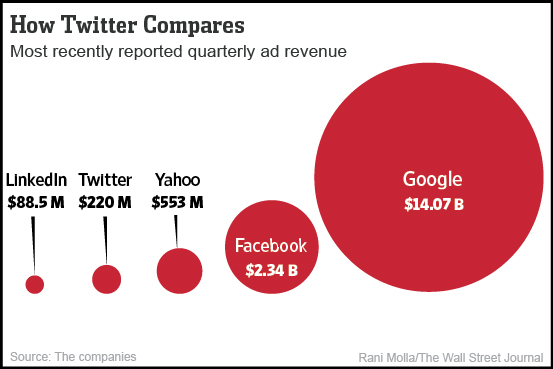 Part of the boon in revenue is owed to consumers’ rapid shift to mobile. Twitter said about 75% of its advertising revenue now stems from mobile devices, up from over 70% the preceding quarter.

Looking ahead, Twitter sees 2014 revenue between $1.15 billion to $1.2 billion, with revenue for the first quarter of the year expected to range between $230 million to $240 million. Read more