They are among dozens of firms worried that proposed new regulations will mean extra charges for fast internet access.

The US Federal Communications Commission said its proposals were designed to protect net neutrality.

Many groups taking part will display the spinning wheel, an icon for slow loading speed, but will run normally.

Indicating that it would take part in the protest, Netflix posted an animation of the wheel on its US Twitter account on Monday. The icon will link to a page showing readers ways to take action to defend “net neutrality”, Agence France-Presse (AFP) reported. 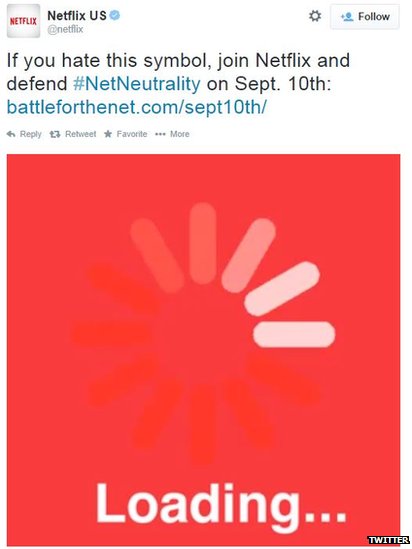 The Netflix post also urged others to join the campaign. WordPress and the American Civil Liberties Union said they were also planning to take part on Wednesday.

A Twitter spokesman told the BBC: “We support the Internet Slowdown campaign and its efforts to draw public attention to a critically important issue. We’re not planning to add a banner to our home page, but we’ll participate in other ways.” The spokesman would not elaborate on the form Twitter’s protest would take.

According to one of the protest organisers, Free Press, Reddit and Netflix will be joined by Mozilla, Kickstarter and Upworthy, as well as Automattic – which runs WordPress – Digg and Vimeo.

Other online firms taking part will include Boing Boing, Thunderclap and Urban Dictionary, as well as Foursquare, Digg and Cheezburger.

“The cause of net neutrality is important to us as a business. It’s important to our visitors, and it’s important for our democracy. We’re proud to take part in the Internet Slowdown and encourage others to join with us,” said Reddit general manager Erik Martin.

Paul Sieminski, general counsel of Automattic said: “The free and open internet has been central to the economy and to global free expression. Everyone has to step up now and do everything they can to protect it,” according to AFP.

“We need our leaders to stand up to the cabal of cable and phone giants that have called the shots in Washington for too long,” Free Press Action Fund president Craig Aaron said.

The move follows the proposal from the Federal Communications Commission (FCC), which would require telecom providers to ensure that “all users have access to an internet experience that is sufficiently robust, fast and effectively usable”.

The proposal came after a US Court of Appeals ruling in January that found that broadband providers were not under an obligation to ensure all internet traffic was treated equally.

The FCC’s proposals defined users as both consumers and “content providers who do not enter into specific arrangements with broadband providers”.

Providers would be banned from blocking downloads of legal content but the rules would leave the door open to them to charge for “prioritised” data delivery.

In response, more than 100 technology firms, including Microsoft, Google, Facebook and Twitter, wrote to the FCC claiming the rules “would enable phone and cable internet service providers to discriminate both technically and financially against internet companies and to impose new tolls on them”.

They wrote: “This represents a grave threat to the internet.” Read more