Over 10 years ago, Nii Narku Quaynor has been featured in the internet platform in Africa as an engineer who has played an important role in the introduction and development of the Internet In his country Ghana. He established the computer Science Department at the University of Cape-Coast in Ghana, some of these activities earned him the Jonathan B. Postel Service Award in 2007.  Nii served as the At-Large Director of ICANN chosen from the African region in the October 2000 At-Large voting process, when ICANN was at its infancy and few African populated the coast of ICANN. He served until 26 June 2003.

Though given his resume, Nii’s work was most relevant over a decade ago, particularly in his circle of friends in Ghana, and his community of influence is said to have called him the father of internet because he also set up the first ISP in Ghana.

But later on, he is said to have used his political connections and influence peddling schemes with the government that was,  and run an monopoly of the ISP business, which was seen as a corrupt practice.  Accused by the existing businesses community and the newly appointed government, in early 2000, his entire business faltered to bankruptcy.  After losing many court battles, he then went back to teach at the University.

With his old affiliate Government back reappointed, he has since been trying to pick up the pieces where he left off.  Unfortunately, his come back to ICANN currently has been pegged with the same influence peddling tactics he is known for.  He has allied with his ICANN Alumni friend, Dr. Steve Crocker, the current Board Chair  to make a high come back to ICANN circles, where Crocker has been seen openly pushing for NiiI’s visibility.  During the ICANN Durban Public Forum Crocker introduced him as:

“Nii has an extraordinary reputation throughout the technical community…He shares a deep technical background”.

While that may be true years ago, and Nii’s involvement with the New ICANN program, including the New gTLD can be rated a ZERO.  However, Crocker showing more of his ignorance about Africa and Africans, during the Prague meeting, he was seen and heard promoting Nii and his special interest group that initiated ICANN Africa Strategy to hi-jack .africa back to their old glory days, naming them the Entrepreneurs of Africa, where perhaps only Kheweul the Senegalese startup by Mouhamet Diop deserves such credit for running the first private registrar business in Africa.  The rest of the group of the ICANN Africa Strategy are simply self selected friends that are bound to use ICANN to the service of their own egos and pockets, and Crocker seem to be right in the middle of it.

Aside from his ICANN alumni status with Nii, the unusual alliance of the Dr. Crocker with the African fraternity is seen as a way of buying in leverage from the “untapped African DNS business prospects” that he is expects lay ahead in the deal his company Shinkuro has cut with ISOC.  ISOC is said to have signed partnership with the African Union Infrastructure Division, with the same special interest group intervention, that have been pushing the .africa TLD in the same agenda, with the aim to “Promote Global Deployment of Domain Name System Security Extensions (DNSSEC)”.    In a recent Press release, while commenting on the ISOC deal, Dr Crocker the CEO of Shinkuro.said:

“Shinkuro is excited the Internet Society is lending its weight and prestige to foster full deployment and use of DNSSEC,”

Nii’s claim to fame of being Father of Internet has been exaggerated to a point where even many in ICANN community are confused about his role in Africa vis a vis his own country.  Surely “Father of Internet” names have been given to global personalities like “Vint Cerf“, who is a co founder of internet technology “TCP/IP”. 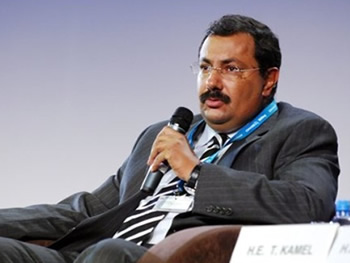 Many in their careers of starting an ISP in their home countries or early contribution to Internet services in their home countries have been given similar names including Dr Tarek Kamel an Egyptian expert in global Internet governance issues, considered the “Father of the Internet” in Egypt. Kamel served as the Minister of Communications and Information Technology from July 2004 to February 2011, where he was responsible for the reform of the ICT sector and the development of telecom services and the Internet industry in Egypt. He now serves in ICANN.

There is Chima Onyekwere, named also “Father of internet” in Nigeria for founding Linkserve Limited in 1996, the first ISP in Nigeria. He is an information technology professional and a technology entrepreneur and was appointed consultant to Nigerian Communications Commission (NCC) and a member of the board of Trustees of Nigeria Internet Group, a Chairman of many, including the Board of Trustees of  ISPA, IXP of Nigeria.  In 2007, he was awarded the prestigious Officer of the Order of the Niger (OON) by the President of the Federal Republic of Nigeria for his exceptional pioneering and ongoing efforts in shaping the ICT landscape in Nigeria. He continues to motivate internet development in his country and by extension Africa.

Sammy Buruchara too started the first ISP in Kenya and is lauded with similar credentials, except a bit young to be a father of anything.

Many other Internet pioneers all over Africa have been able to usher in new crop of talent and leadership; this is also evident in the commercial and political platforms. One wonders why ICANN Africa has exalted Nii, but also refused to let him groom other professionals to learn the activities of ICANN and other strategic internet activities so that they can take the baton early enough. It  shows Africa’s mistake is over-reliance on individuals, like the African Heads of States, who have been there long enough to train energetic people to take over and revolutionize the stagnating continents ICT gradient.

Nii has not been visibly active in any ICT or ICANN activities for nearly a decade, hardly the new ICANN societies do not even know him.   Many have observed his come back and sustained presence in the past year was dotted with the continued fight with DotConnectAfrica, who according to his ICANN Wiki “has been a vocal critic of Quaynor’s dealings with .africa, citing conflicts of interest and abuse of power.”  He has been fiercely criticized for being behind a cabal of individuals who have dampened the transparent and unbiased bid for the .africa at the AU, ICANN and with the internet community.  He is said to have engineered the metamorphosis of the organizations behind the formation quest for DotAfrica such as dotafrica.org, AfTLD, and ARC among others, including the Dotafrica Taskforce to influence the AU on .africa as much with ICANN Africa Strategy to main stream the same with ICANN, of which he put himself in positions of Vice Chair and Chair.

He in 2004 registered dotafrica.org and went dormant only to resurface a decade later, after seeing an opportunity lurking in a well marketed .africa and tried to use his currently re-elected Ghanaian government connection that assisted him in his ISP business in the past, to play the same round of game to manipulating the AU, as part of his role in the AU dotafrica Taskforce, to support his bid, despite his denials of it, to using the dotafrica.org and later AFTLD.   Both of his trails however fell unsuccessful, under the sustained No Campaigns of DotConnectAfrica.

His self centric dominance is clearly falling and its impact is sleeping away despite his west African connections and the fraternity at ICANN leadership led by the Current ICANN Chairman, Crocker is promoting him.  I could not help but use the comment one person made in ICANN Durban meeting, as he was chosen to read a speech during the Public Forum that fell on Mandela’s Birthday, saying,

“He used the Madiba story to hi-jack the stage for his own self importance, shamefully and many could not understand if the final standing ovation given by the crowd was for him or Mandela, was nearly laughable”

While most of other leaders in the African continent have moved on to global positions of relevance, Nii’s attempt to continue to remain relevant in the industry is banked only on his old time fraternity at ICANN, and currently the people he populated in the ICANN Africa Strategy, which includes his old time friend and business partner at AfriNic, Pierre Dandjinou, a new ICANN hire, VP of Africa  Therefore, it is blatantly obvious who is promoting who in the “Club Med” of the ICANN world, where the external media and those that are not ICANN insiders get manipulated in the process.

As for Nii Quaynor, whose contributions to ICANN or internet was made over a decade ago, many who are outside his ICANN circle now see him not as “The Father of Internet” rather as “The Christmas Tree of Africa”.  As it appears that the African Internet Community have not raised itself to any meaningless position to replace the old legacy of the Nii Quaynor with a new personality.

However, many know that his come back to ICANN is supported by the Chairman of ICANN and his circle of special interest groups that will benefit from the African DNS industry and using this mileage to strengthen his existence.