Multilingualism not only expands cultural horizons but also provides a tool for innovation, speakers gathered at an international roundtable yesterday said. However, language uniformity is a tempting road taken by many – often for cost-related reasons – while multilingualism should be promoted as a factor in development, they said.

The International Organisation of la Francophonie (OIF) organised the roundtable at the United Nations in Geneva to discuss technology, innovation and multilingualism among officials from several UN agencies, and a representative of the European Organization for Nuclear Research (CERN).

The 3 April event was the fourth in a series of annual discussions on multilingualism organised by the OIF and the United Nations Office at Geneva (UNOG). The three previous sessions were on multilingualism in international organisations and the challenges of diversity, choosing which investments for which objectives, and information and communication in a globalised world. 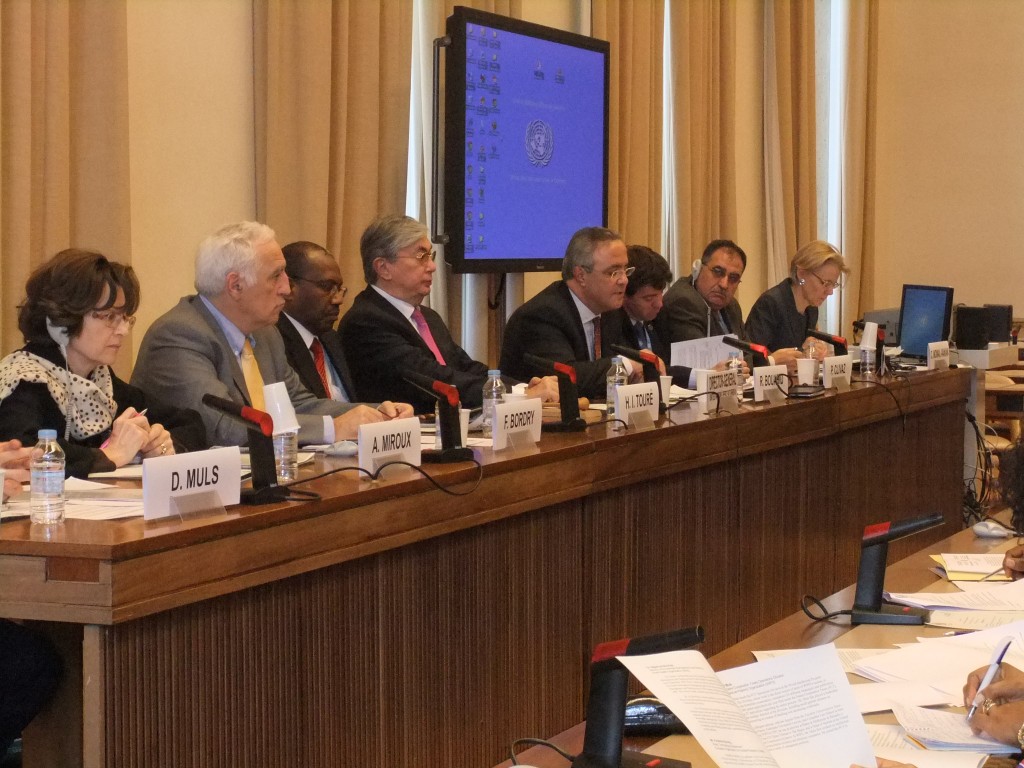 OIF: Multilingualism is an opportunity and a challenge, a chance and a responsibility (Photo Credit: Catherine Saez, IP-Watch)

Ambassador Ridha Bouabid, OIF permanent observer to the UN, said multilingualism, a core priority of OIF, is an opportunity for the diffusion of knowledge, a tool for innovation and for technological progress. But it is often perceived as an economic burden and sometimes considered as superfluous by companies and states.

However, he said, this is a short-term vision as multilingualism has the potential for direct and indirect economic benefits and for innovation. According to Bouabid, because multilingualism widens access to information, induces mental flexibility and enhances learning and problem-solving capabilities, it also creates an innovation-enabling environment.

Hamadoun Touré, secretary general of the UN International Telecommunication Union (ITU) said he himself is polyglot, having been raised in Mali with Songhai and Bambara, learning French at school, followed by English and Russian as he went to study in Russia.

There are over 6,000 spoken languages in the world, and “we must respect and honour this diversity and avoid any linguistic imperialism,” he said. He made specific reference to the internet. “Are we going to choose the path of less resistance and keep the current structure of internet, which imposes on all internet users the use of the Latin alphabet and is vastly unilingual?“ he asked. For a non-English speaker, the internet is not as accessible as it should be, he added.

Some two-thirds of the world population still does not have any internet connection, he said, and therefore no access to the world’s largest library, or the world’s largest market. They are deprived of “immense” opportunities that are offered to the other third, he said, advocating for more investments to develop broadband.

Mentioning the alliance between the ITU and the United Nations Educational, Scientific and Cultural Organisation (UNESCO) on the Broadband Commission for Digital Development, he said multilingualism on internet could be one of the main factors in the realisation of the UN Millennium Development Goals (MDGs). The target for the MDGs is 2015. In September 2012, the MDG Gap Task Force said in its report that despite some targets of the MDGs that were met ahead of the deadline, aid was showing a worrying decline that could jeopardise the momentum of development gains.

Multilingualism, Touré said, offers new viewpoints on the world and encourages inspiration and creativity in all human activities. He said he expects that multilingualism will bloom in the next ten years and will bring a wave of innovation in its wake.

David Muls, director, Patent Cooperation Treaty Operations Division at the World Intellectual Property Organization (WIPO), said multilingualism is a very concrete issue in the area of intellectual property. Patent examiners have to research prior art to determine if the proposed patent relates to a true invention and following the Patent Cooperation Treaty’s (PCT) guideline for prior art, finding, and making use of documents that are not translated constitutes a real challenge, he said.

The PCT definition of prior art is that “relevant prior art shall consist of everything which has been made available to the public anywhere in the world by means of written disclosure.”

The question of multilingualism might be one of the most fundamental questions in the IP area, since the quality of the patents largely depends on the fact that the patent examiners were able to find all relevant prior art information, he said, adding that the solutions to this challenge probably would be technical. Automatic translations can be a solution, he said, but it is not clear if the level of quality will meet the needs of a serious search.

Anne Miroux, director, Division on Technology and Logistics at the UN Conference on Trade and Development (UNCTAD), said English does not have language supremacy anymore with only 27 percent of world users, with Chinese on its heels. By 2015, she said, more internet users will use Chinese than English – though that would not really represent linguistic diversity, only splitting the internet into two major linguistic blocs.

Frédérick Bordry, head of the Technology Department at CERN, underlined the importance of cultural and linguistic diversity. He said the CERN, which will celebrate its 60th anniversary in 2014 now had 20 European member states but it was opening to other countries as Israel and Serbia were potential candidates and Brazil, India, Russia and Ukraine were “knocking at the door.”

Recalling that the World Wide Web “was born at CERN,” and that the fundamental research led to a practical tool used by billions of people, he said that innovation was at the heart of the organisation. The constraint of learning a foreign language, according to Bordry, is a source of innovation.

For Najeeb Al-Shorbaji, director of knowledge management and sharing at the World Health Organization (WHO), “if a piece of information exists in a language that the individual does not understand, it is as if it does not exist.” The WHO’s mission, he said, is to allow more scientific and technical information, more evidence and more messages to become available to people in a multilingual environment.

The World Health Assembly adopted a resolution on multilingualism in 2008, according to the WHO website, and has launched a five-year plan of action to improve linguistic diversity across the organisation.

Al-Shorbaji said the WHO also launched in June 2012 the WHO’s Institutional Repository for Information Sharing (IRIS), which includes 6 million documents in the six official WHO languages (Arabic, Chinese, English, French, Russian and Spanish).

Author :Catherine Saez may be reached at info@ip-watch.ch.