Through out the globe, companies are making preparations to comply with new European privacy regulations that take effect come May 2018, However security experts are worried that the changes being ushered in by the rush to adhere to the law may make it more difficult to track down cybercriminals and less likely that organizations will be willing to share data about new online threats.

On May 25, 2018, the General Data Protection Regulation (GDPR) takes effect. The law, enacted by the European Parliament, requires technology companies to get affirmative consent for any information they collect on people within the European Union. Organizations that violate the GDPR could face fines of up to four percent of global annual revenues.

WHOIS: In response to the impending law, the Internet Corporation for Assigned Names and Numbers (ICANN) — has cobbled up a few proposals, all of which would redact some of the registrant data from WHOIS records. Its mildest proposal would remove the registrant’s name, email, and phone number, while allowing self-certified 3rd parties to request access to said data at the approval of a higher authority — such as the registrar used to register the domain name.

The most restrictive proposal would remove all registrant data from public WHOIS records, and would require legal due process (such as a subpoena or court order) to reveal any information supplied by the domain registrant. 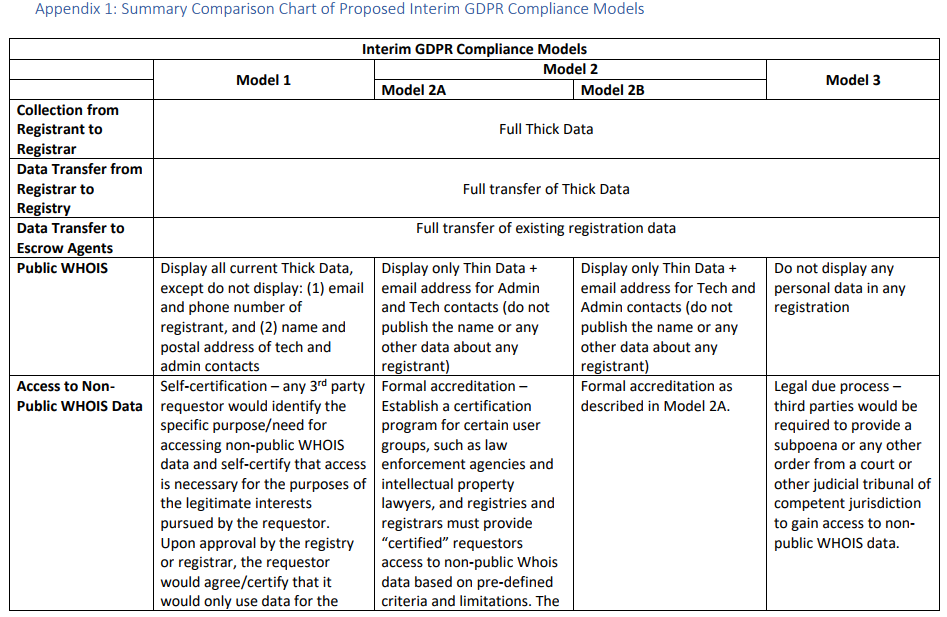 The full text of ICANN’s latest proposed models (from which the screenshot above was taken) can be found here (PDF). A diverse ICANN working group made up of privacy activists, technologists, lawyers, trademark holders and security experts has been arguing about these details since 2016. For the curious and/or intrepid, the entire archive of those debates up to the current day is available at this link.

According to Krebs, a drastically simplified explanation on discussions is into two sides, those in the privacy camp say WHOIS records are being routinely plundered and abused by all manner of ne’er-do-wells, including spammers, scammers, phishers and stalkers. In short, their view seems to be that the availability of registrant data in the WHOIS records causes more problems than it is designed to solve.

Meanwhile, security experts are arguing that the data in WHOIS records has been indispensable in tracking down and bringing to justice those who seek to perpetrate said scams, spams, phishes and….er….stalks.

For my part, I can say without hesitation that few resources are as critical to what I do here at KrebsOnSecurity than the data available in the public WHOIS records. WHOIS records are incredibly useful signposts for tracking cybercrime, and they frequently allow KrebsOnSecurity to break important stories about the connections between and identities behind various cybercriminal operations and the individuals/networks actively supporting or enabling those activities. I also very often rely on WHOIS records to locate contact information for potential sources or cybercrime victims who may not yet be aware of their victimization.

Many privacy activists involved in to the WHOIS debate have argued that other data related to domain and Internet address registrations — such as name servers, Internet (IP) addresses and registration dates — should also be considered private information. My chief concern if this belief becomes more widely held is that security companies might stop sharing such information for fear of violating the GDPR, thus hampering the important work of anti-abuse and security professionals. [continued…]

Certainly as the Internet matures and big companies develop ever more intrusive ways to hoover up data on consumers, we also need to rein in the most egregious practices while giving Internet users more robust tools to protect and preserve their privacy. In the context of Internet security and the privacy principles envisioned in the GDPR, however, I’m worried that cybercriminals may end up being the biggest beneficiaries of this new law.

Read the whole entry on krebsonsecurity.com