As writen by Kieren McCarthy on Theregister.co.uk 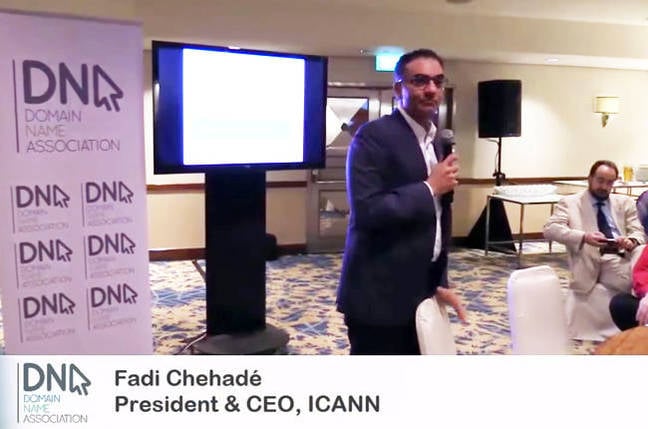 Video footage has surfaced of ICANN CEO Fadi Chehade slagging off an independent team investigating how the internet’s crucial IANA body will be governed in future.

Chehade said during breakfast with domain-name industry types: “There is no one today in the CWG [Community Working Group] who even understands how the functions work. I sent my CTO David Conrad to explain to them how the system works … Frankly, no one there even knew that he was talking about.”

That response surprised, and even infuriated, some of those at the morning meeting, organized by the Domain Name Association (the DNA) and held in Singapore in February. A video of the event appeared online in the past few days.

The US government contracts non-profit ICANN to run the so-called IANA functions – a body that runs the highest level of the world’s DNS, allocates IP addresses, and ensures developers can agree on the same numbers and protocols when writing software that communicates over the ‘net. It’s what keeps the internet as we know it glued together.

That crucial contract is coming to an end, and because the US wants to step away from ruling the internet like an unelected king, the future of the IANA functions is being explored by a panel of experts called the Community Working Group (CWG). ICANN, of course, would love to run IANA all by itself, simply put.

One DNA member who took Chehade to task was Jay Daley, CEO of New Zealand’s .nz registry. “I was very disappointed by your characterization of the CWG. We need a consensus that comes from an honest meeting of minds. Inflammatory rhetoric like that is not going to help it. I expect better, really,” he told Chehade.

Daley continued: “There are people there that have been running registries for longer than many of us have been in the business there… There were people there who were involved in setting up ICANN. To describe them as people who are clueless or whatever phrase you used, I think was unfortunate.”

Chehade refused to apologize, however, saying that the review team has so far failed to come up with any language on the actual technical requirements for the IANA functions.

Although Chehade has a point – the CWG has spent far too much time developing new governance models and not enough time understanding the functioning of the contract – the fact that he was willing to question the group’s abilities is strikingly impolitic.

The video will also prove embarrassing this week in particular as two review teams looking into the IANA contract and ICANN’s broader accountability problems will be meeting in Istanbul to make progress in time for a September deadline. ICANN is hosting the event, and Chehade will be attending.

In recent months, amid these sensitive issue of the IANA transition, Chehade has engaged foot in mouth. In January, he invited the ire of another part of the internet eco-system when he described domain investors, or domainers, as “domain hoggers.” Prior to that, he was heavily criticized for pushing and promoting his vision of a new internet governance body, which he dubbed the NetMundial Initiative, even contributing $200,000 of ICANN funds to its creation. The initiative is still trying to get off the ground.

This latest video also reveals a number of other troubling comments from Chehade, including the suggestion that ICANN set up special processes and has even dedicated staff members to work with the DNA, partly in an effort to avoid having to share information with those outside the industry body.

ICANN develops the rules for the domain-name market, and is mostly funded by those same companies. One of the biggest issues identified with ICANN’s accountability is the risk it could be “captured” by the industry itself, to the detriment of the broader public interest.

Chehade clearly does not share those concerns, arguing that ICANN should actually be closer to the people who pay its bills.

Referring to the Global Domains Division (GDD) – a new department set up by Chehade’s long-term friend and ICANN COO Akram Atallah, and through which most of the money from the industry flows – Chehade said: “Of course some people call GDD the regulator, and in many ways they could be acting this way. I think, frankly, if you know Akram well and his team, we’re trying to be less that.

“We really need to be less that and more your partners. If we can solve issues as they happen, before they become critical, before the heat comes up in the political space of ICANN, then I think we all benefit from that.”

Chehade and ICANN the corporation are frustrated that their efforts to simply take over the IANA contract from the US government are being stymied by a majority who believe there needs to be a significant degree of separation between the two. The current proposal is that the IANA contract itself is held by a shell company and awarded to ICANN, with reviews carried out by the internet community.

As it is currently structured, that approach has some serious issues, so ICANN has been successful in insisting that a parallel process also be drawn up that sees the organization given full control over the contract in return for some improvements in ICANN’s processes. ®