The Federal Communications Commission released a plan on Tuesday to dismantle landmark regulations that ensure equal access to the internet, clearing the way for internet service companies to charge users more to see certain content and to curb access to some websites. 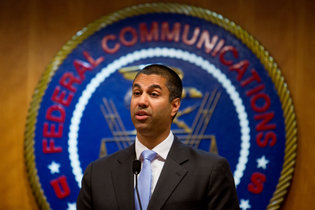 According to a new report by NYTimes The proposal, made by the F.C.C. chairman, Ajit Pai, is a sweeping repeal of rules put in place by the Obama administration. The rules prohibit high-speed internet service providers, or I.S.P.s, from stopping or slowing down the delivery of websites. They also prevent the companies from charging customers extra fees for high-quality streaming and other services.

The announcement set off a fight over free speech and the control of the internet, pitting telecom titans like AT&T and Verizon against internet giants like Google and Amazon. The internet companies warned that rolling back the rules could make the telecom companies powerful gatekeepers to information and entertainment. The telecom companies say that the existing rules prevent them from offering customers a wider selection of services at higher and lower price points.

“Under my proposal, the federal government will stop micromanaging the internet,” Mr. Pai said in a statement. “Instead, the F.C.C. would simply require internet service providers to be transparent about their practices so that consumers can buy the service plan that’s best for them.”

Mr. Pai, a Republican who has pursued an aggressive deregulation agenda, was widely expected to have his plan approved during a meeting on Dec. 14. The two other Republicans on the commission generally vote with Mr. Pai, giving them a majority over the two Democrats.

The public filed over 20 million comments to the Federal Communications Commission over its plan to scrap the net neutrality rules.The comments have hit a new record for the FCC. It is more than five times the number filed on the agency’s previous net neutrality proposal in 2015. The comments on that plan held the prior record with nearly 4 million filed.