By Jeff John Roberts: The latest New York City “land rush” is already turning into a party for cyber-squatters, who have snapped up some familiar names. The episode shows, again, how the system is geared in favor of the domain name industry, rather than brands or the public.

Well, that was fast. New York City’s shiny new “.NYC” internet addresses have been on sale barely a week, and already they’re being peddled by hustlers and opportunists.

Take the website “NewYorkJets.nyc,” for example. Registry records show the name is not owned by the hapless football team but someone named Jon Calman, who lives in New Rochelle. And Jon is willing to sell that name to the team, or anyone else who wishes to buy it: 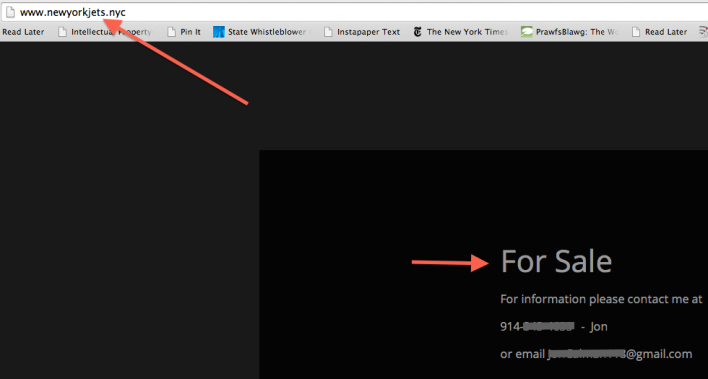 Meanwhile, other random individuals have grabbed names like “Yankeesbaseball.NYC” and “NewYorkGiants.NYC,” according to Stuart Fuller, an executive with the brand management firm NetNames. Fullers adds that 80 percent of of the approximately 27,000 .NYC domains registers so far don’t resolve to a website — and likely never will.

“People registering the name have no intention of using them. They’re opportunists who play the system,” said Fuller, noting that the new city-based names (.NYC joins .Berlin and .London) are another opportunity for scammers and cyber-squatters. Read more from the source