A new CENTR report has quantifies the use of local languages on country code domain names. The report shows that local languages are popular on ccTLDs. Over half of websites have English as their primary language, but there’s a big difference between languages on each top level domain. 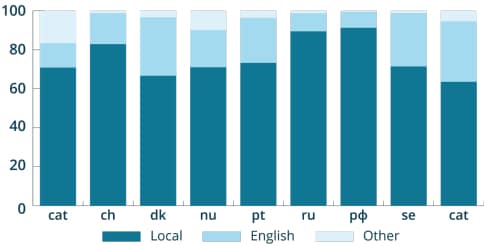 All told, it analyzed ten ccTLDs representing 16.4 million domains from territories in which English is not the primary language.

The principal languages spoken in the country or territory comprised at least 64% of the content in the zone, and the average rate per TLD was 76% (see chart above).

The numbers are even higher for domains that allow internationalized domain names.